In Python, exec() is a very interesting and useful built-in function, unlike the eval() function, which can only execute the result of calculating mathematical expressions, exec() can dynamically execute complex Python code and can be very powerful.

The Python exec() method executes the object passed. The syntax is shown below:

The passed object could be a string, an open file object, or a code object.

Working with the Python exec() Method

First is a simple little example with the following code.

The output of this code is.

Here func is a string, which is a function that recursively calculates the factorial product of an integer. Since exec() only supports string and code object arguments, we want to convert the recursive function into a string, of course, in Python code format, noting line feeds and indents. The output of the preceding example is.

Some readers may be confused. Isn't this code directly executable in Python, so why go to the trouble of writing it as a string and executing it with exec()? The answer is that the example just now is just to demonstrate the basic use of the exec() function, which is much more powerful than that. 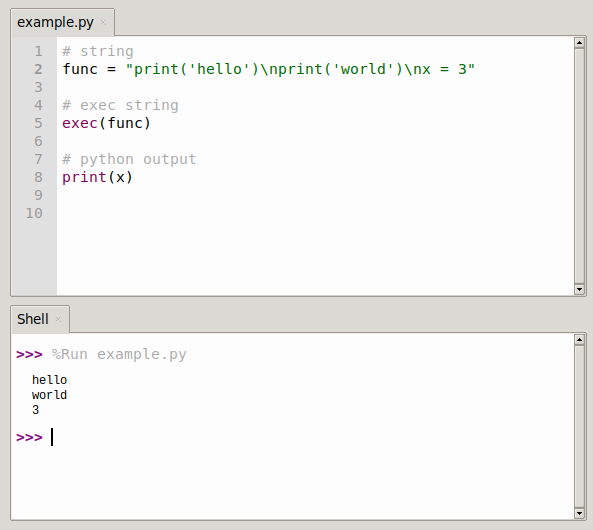 In actual projects, we sometimes write Python code into files, such as the following eg.txt, which stores the Python code we want, for example.

Again, please note that this is a Python code in txt format. So, how do we call it? The answer is the exec() function with the following code.

In the above code, we first read the contents of the eg.txt file and then forward it to the exec() function for execution, the output is as follows.

Isn't that a little awesome?

In addition to the ability to execute string and code objects, arguments can be added to the exec() function, and the passing of arguments can be written in dictionary (dict) form. Specific examples of how this is used can be found below.

The output is as follows.